Over the past couple of weeks, I've come to realize something about the publishing axiom "it's a marathon, not a sprint". I think the phrase needs a caveat added to it. I would add something like: "Compare results all you want, but in reality we're all running different marathons".

I've spent the past year or so putting books up on Amazon. I've also spent the past year analyzing stats, reading countless online articles, and looking at industry trends. I've also realized as of late that I've been spending more time studying stats than actually getting any writing done. It has also changed my outlook from hopeful to guarded to depressed and back again.

I've also realized some authors came into the world of self-publishing with a huge backlist of titles in the traditional publishing world. Others have audiences they've built up over the years and for them, e-books just represent a different, newer market. In other cases, the genres they work in have seen great success over the past couple of years.

I don't have a massive backlist to work with. I do have several manuscripts in storage, however, and am writing lots of new material. So, in comparison to some of success stories I've read over the past year, I do have some things in common (lots of material to work with) but in other ways my books are spread out across multiple genres which makes things "interesting" but more difficult.

That said, I crossed a finish line of sorts last night. I completed work on my first non-fiction offering, "Gathering the Wind: What the Bible Says About God, the Weather, and Climate Change". I've even recorded an audio version for some people to listen to (although the audio quality would have to improve if I were to release it on a large scale). This book is a first for me in terms of non-fiction, but also a first in terms of the extensive research that went into it. The Bible contains hundreds of verses that talk about the weather and trying to distill those all down into a format that is easy to read through was a little tough. Again, though, I learned a lot and the process has produced a template which I can use on future non-fiction books.

The book should be ready to go in the next 2-4 weeks depending on how the formatting process goes. It is a relatively short book at only sixty pages or so, but I'm okay with that. I'm also working on another collection of short stories and another novel which will indirectly tie-in with this non-fiction book.

After all of this, though, I've realized many of us truly are running different marathons. What I consider a success may be very different from someone else. I've also learned I'm much more productive and focused when I don't spend my time watching everyone else run their marathons. In fact, I still like to think of myself as the kid who discovered a manual typewriter in the basement all those years ago and typed up stories late into the night simply for the love of storytelling.
Posted by MGalloway at 8:42 PM No comments:

Email ThisBlogThis!Share to TwitterShare to FacebookShare to Pinterest
Labels: books 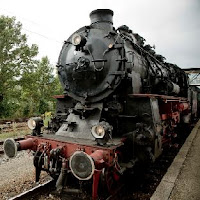 One thing I struggle with as a writer is visibility. I'm well aware of the fact that up until this point, I have not written any guest blog posts (I've read elsewhere I should), have not had any interviews, and only have three books available. Sales are slow at best, although I have given away quite a few copies via Amazon giveaways and have sent out almost twenty paperbacks via Goodreads giveaways. The problem is, though, that free books don't necessarily translate into reviews, and many times readers will pick up free books without ever getting around to actually reading many of them.

I've read that one of the solutions to the visibility conundrum is to write more books. In contrast, however, I seen multiple situations where having only one book available is enough to garner dozens of glowing reviews on Amazon, B&N, and elsewhere. It's also been enough to help these writers gain access to various advertising outlets that have a certain threshold for sponsorships (such as Pixel of Ink and other venues). This threshold usually involves having a certain number of reviews, and typically the reviews as a whole have to average of 3.5 stars or better. In other cases writing more books doesn't help the visibility issue all that much.

I've read elsewhere numerous times that it's a "marathon not a sprint" and that "at the eight or nine month mark sales should improve". Hmmm. I can't say I've seen that type of improvement yet. The other huge factor here, though, is that the digital publishing industry is continually undergoing tremendous change. What may have worked for marketing six months ago may produce diminishing returns now and in fact may never work again at some point for many books. In other words, advice can age pretty quickly in this situation.

That said, I'll continue to do giveaways. In fact, there is one going on over at Goodreads right now until the end of the month. I'm also continuing to write more books. I'm currently editing a non-fiction book (Gathering the Wind), have written several stories for a short story collection (Corridors), and am in the planning stages of a suspense novel about stormchasing (Race the Sky). Hopefully I will complete all three this year, and Gathering the Wind should be ready to go in April. I will continue to run giveaways on the new books over at Goodreads and also likely start putting the first three books up onto B&N, the iTunes store, and elsewhere. If I have enough time, I may even put up an audio version of the first few chapters of Gathering the Wind.

Part of me wonders what I could have done differently up until this point. Many have suggested that it's fair to ask readers for reviews...which is not something I have done. So, in light of that, I will say this: if you have read one or some of my books and like them or get something out of them, please write a review if you can find the time. I really appreciate it. A few people have already written some nice things over at Goodreads which has been surprising to me...and I'm very thankful for those.

Visibility issues aside, I'll keep chugging along as best I can. From my vantage point, though, it's one long climb uphill right now.
Posted by MGalloway at 12:50 PM No comments:

As I was doing research for my non-fiction project, Gathering the Wind, I came across a startling discovery. One of the weather related examples I use in the book is the Grasshopper plagues that affected several Midwestern states during 1873 through 1877. The grasshoppers, otherwise known as Rocky Mountain locusts, often arrived in great swirling masses that resembled storm clouds and went on to destroy countless acres of crops to the tune of over $200 million in damage.

So I began to read several articles as to how such a widespread population of bugs could just suddenly disappear. No one seems to know for sure, but according to a New York Times article and this article, theories range from plowing/irrigation practices to farmers bringing in "insect eating birds". How could a swarm once described as being "1,800 miles long and 110 miles wide" disappear due to increased plowing?

I have driven along long stretches of Interstate 90 over the years. I can tell you there is an awful lot of open space between the South Dakota/Minnesota border and Washington state, and it isn't all farmland or mountains. Somehow I think there is a lot more to this story than just birds and plowed land.
Posted by MGalloway at 3:50 PM No comments: 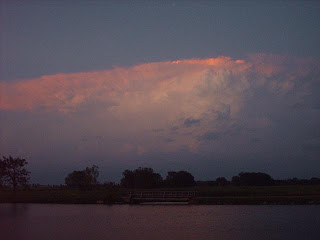 One of the projects I'm working on right now involves rewriting a stormchasing novel I wrote a dozen years ago, titled Race the Sky. In preparation for the rewrite, I've spent the past several years reviewing online chaser journals, hours of documentaries, reading tons of articles, as well as chasing a storm or two. I also regularly read the technical discussions found over at the Storm Prediction Center, and today, of course, I read of a High Risk for severe weather in a portion of the country I just traveled through a couple weeks ago. Oddly enough, one of the places we passed through on our return trip was Xenia, Ohio, which was pummelled during the 1974 "Super Outbreak".

Of note in today's Day 1 Outlook wording was this line that followed a description of the atmospheric conditions in the region:

I suspect this could be a memorable day in some parts of the region, and not in a good way. On a related note, I also came across this video streaming page with live video from various chasers in the region. It probably takes a broadband connection to watch, but it's interesting to see how many people are tracking a particular potential outbreak. It will be interesting, too, to see if I'll be able to update the essay I wrote last year about tornadoes after the day is done.
Posted by MGalloway at 12:22 PM No comments: