This will be the last of the writing-related updates for a while. I've decided upon an ambitious publishing plan for the coming year, which in some respects, is already underway.

For starters, Ionotatron, should be done by January of 2014. The third novel is already being outlined and will follow within a few months of that. I've also already started on another science fiction short story collection which has no title at the current time, but contains eighteen tales.

But that's not the biggest update.

I'm also finally going to (re)outline and (re)write a novel I've written twice before...Race the Sky. It's a standalone storm chasing novel, but with a supernatural twist. If that isn't enough, I'm also working on plans for another nine science fiction novels, which will be broken into three trilogies.

In short, I'm going to need a lot of book covers in the coming months...
Posted by MGalloway at 4:37 PM No comments:

I had an idea the other day, but I'm not sure it would pan out in the long run.

I'm currently taking a short break in my writing schedule, but looking ahead I'm trying to gauge what types of fiction I should write after I finish the trilogy I'm working on. I have at least a dozen ideas for another science fiction short story collection, but I also want to work again on a stand-alone novel I started years ago.

Then I thought of another idea: write three science fiction short story collections in a row and make many of the individual stories available via Amazon's KDP Select for a limited time. I figured that would probably entail writing at least 45 short stories or more. The alternative would be to write three full novels instead, since one short story collection takes just about as much time as it does to write an individual novel.

The nice thing about short stories, too, is that as an author, you can try out numerous ideas at once without a lot of time investment or risk. Those results can impact future novels. With the last two collections I've written, however, it felt as if many of the stories wanted to keep going...as if they were meant to grow into full length novels. Yet writing a dozen novels in a year's time is not an easily achievable goal, even if a writer goes full time.

Whatever the case, I hope to have books two and three of the trilogy out soon.
Posted by MGalloway at 11:53 AM No comments: 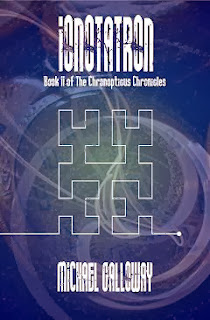 Here's an intermediate cover for the second installment of the trilogy I'm working on. Although the cover is not finished, as of two days ago I did complete a rough draft of Ionotatron. This second book is a full novel that builds on the foundation of Fractal Standard Time. The overall theme of the book is a bit darker than its predecessor, but echoes of this book can be found in the second, fifth, eighth, and eleventh stories of the first book (can you sense a pattern here?).

One of the main themes in this book will be the refinement and perfection of existing technologies. In this novel those two technologies are the Cyclode robots (introduced in the first book) and the Chronopticus Network. Both of these technologies will be expanded upon further in the third book and ultimately controlled by a cold, calculating character who arrives towards the end of this book. There is also a theme of escalating complexity (hence the Hilbert Curve on the cover) as a race is on to build the ultimate information network.

In addition, while the first book asked, "Can Eden be built on another planet?", this book asks, "What is one's definition of Eden?" In the futuristic setting of this series, many settlers arrive on Mars with very different agendas. Many seem intent of escaping something back on Earth in hopes of creating their own private utopia in the stars.

As far as the series goes, I've also started working on the outline for Chronopticus Rising, which should be due out before March of next year, if all goes well. I hope to have Ionotatron out by Christmas, however.
Posted by MGalloway at 2:26 PM No comments: