I've mentioned previously how the series I'm currently working on is complicated, evolving, and is not going the direction I originally intended. It has been a surprising process in some ways and the final book is proving to be no exception. I also think making the story arcs in the first book a fractal and then repeating that fractal across the larger series is probably confusing a lot of people who are used to a series being composed of novels (and not short stories mixed with novels). If I were to rewrite the first book, Fractal Standard Time, it would probably end up as a novel...although it would be difficult to duplicate the documentary-style aspect that comes from the short stories being chained together like in the current version.

That said, I think there is a lot of interesting dynamics that come into play when working on a series. I hope to explore those more in the next series, but I have two more short story collections I plan on releasing first. One collection will have a series of interlinked stories focusing on a single character and the other will be a collection of science fiction stories similar to the style of Corridors. I'm working on stories for both collections right now, in addition to working through the rough draft of Chronopticus Rising (Book III of the Chronopticus Chronicles).

Both collections contain stories that are experimental gambles. For me that is an important part of the overall writing process. Ultimately it leads to stronger novels because with short stories, you can quickly try out a new idea, character, setting, or story line with minimal investment in terms of time. I usually then cultivate and edit the better ideas, which may involve a dozen full edits per story.

Here's the other aspect of tinkering with short stories as a means of experimentation. It allows me to try out different structure ideas that could fail miserably if I tried them in a novel first. A novel is a considerable time investment and building multiple storylines on top of a structure that doesn't work can lead to a lot of problems and ultimately the abandonment of the story altogether. It's sort of like building a house on top of a foundation whose walls leak every time it rains. So I've found it best to try out unusual ideas in short form first because it saves time in the end...an efficient gamble, in other words.

We'll see where this goes...
Posted by MGalloway at 3:51 PM No comments:

For anyone that might have been waiting...the Kobo versions of my books are now available. There are nine titles available to date, with Fractal Standard Time and Ionotatron coming in a few weeks. Also, Fractal and Io will be available soon on iTunes and Barnes and Noble in the coming weeks.
Posted by MGalloway at 8:25 PM No comments:

Email ThisBlogThis!Share to TwitterShare to FacebookShare to Pinterest
Labels: books 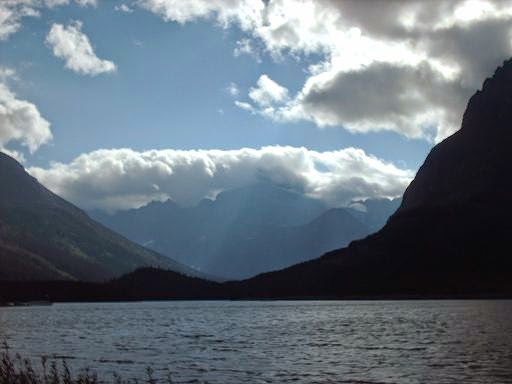 Sometimes obscurity is a good thing.

For example, in the picture above, a bank of clouds moved in to obscure some of the peaks in Glacier National Park. The clouds were full of rain, but they did not move past the mountaintops and kept away from where we were hiking. Yet they obscured the peaks that we had seen the day before.

Where did the peaks go? Of course they didn't really "disappear" but they were merely hidden by cloud cover. The height, breadth, and character of the peaks did not change during this time. Unless you climbed up the mountain and into the clouds (and risked getting wet) all you would be able to refer to would be photographs or memory until the weather changed.

In much the same way, books, once written, can be obscured by a multitude of factors. For example, some traditionally published books get a huge publicity and media push right before and just after they are launched. This can propel a book right up the sales charts, while other, equally well-written books get buried far beneath. Others have an initial burst of sales and then fade into obscurity for years on end until a topic becomes popular again or a movie is made from the book.

In the majority of these cases, the books are not changed or altered in any significant way...at least in regards to fiction. Yet depth and character of the book can remain unchanged or in many cases undiscovered.

A well-written, yet undiscovered book is perhaps the toughest thing to endure for many writers. Months, if not years, of research, work, and editing can be put into a book, but if its only fate is to stagnate on the bottom of the Amazon charts it causes a writer to spend more time reflecting instead of writing.

Reflection is not a bad thing, though. In the end it may benefit both future books and the author, and ultimately the reader. There is a potential that the time of reflection may turn into a hiatus and that can turn into permanent suspension of writing altogether...which is a true tragedy.
Posted by MGalloway at 8:09 PM No comments: