The Power of Posterboard

Today is the first of a few "craft" related posts I hope to write over the next few weeks. In future posts I hope to cover such topics as outlining and rough drafts. These ideas won't work for everyone, but they might be of some use to someone.

One of the techniques I came up with years ago was to use a piece of poster board when outlining a novel. Any thin and cheap piece of poster board will do (I use ones that are 50 cents or less), and a piece that is 12" x 24" or bigger works best. The purpose of the board is to sort out narrative arcs and find plot holes. I find it to be especially useful for novels where there are multiple points of view and multiple story lines going at once.

For example, here is a poster board graph I came up with for the novel, Theft at the Speed of Light: 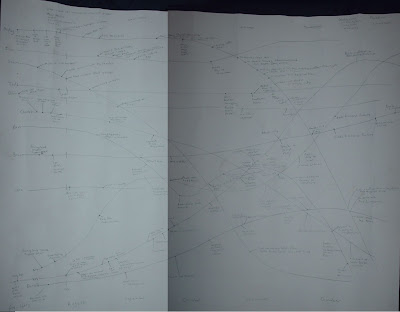 The final version of the book ended up being different at various points, but the main story "beats" (significant moments) can be seen here. On the left hand side of the board are the character names and along the bottom axis is a timeline. With other books, I've labeled the bottom axis with chapter numbers.

Each curve represents a character's inner journey. Note that not all the points on a particular character's narrative arc end up in the novel. As an author, I need to know what is going on with each character throughout the book at any given moment, but whether I share that or not with the reader depends on the situation. Also, the shapes of the curves are more indicative of the overall "inner condition" of the character rather than representing rising/falling actions. For example, in the graph above, Charles' condition deteriorates as the novel progresses, while Alex's generally improves.

Using this technique can also help spot holes and other potential problems with the plot. In the case of an upcoming novel, The Hammer of Amalynth, I first wrote an outline for the book and then drafted a poster board graph. I quickly realized that the novel needed more subplots and more characters. Had I decided to plow ahead and write the novel anyway, the first draft would have only been thirteen chapters long and in need of extensive rework to make it bigger. I'd rather spend my time fixing the outline at the outset rather than spending days trying to diagnose and fix the issues later on.

Although this isn't a foolproof method, it does tend to help cut down on errors. I also only create a graph after I've written (and rewritten) the outline of a book. After the graph is created I go back and edit the outline further to fix any obvious issues. Then, and only then, will I start in on the rough draft.
Posted by MGalloway at 3:12 PM No comments: