Book Release: The Hammer of Amalynth

Book II of the Secrets of the Elements series is now available in paperback and at Amazon.com.
Posted by MGalloway at 8:21 AM No comments:

Note: This is the first of three updates on my next book, The Hammer of Amalynth.

For this post, I thought I would try something a little different. The writing of this book, The Hammer of Amalynth, was very dynamic. It wasn't until late in the process that I settled on certain details. As you can see from the pictures below, even the first page changed quite a bit from draft to draft: 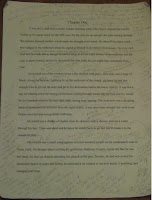 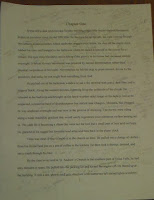 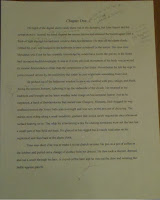 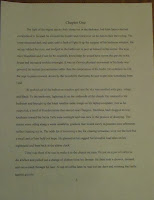 Now imagine over a hundred pages with these types of changes. It makes for one very long editing process. The peculiar part was that I had much of the opening scene figured out months ago. Go figure.

So what, exactly is the book about? First off, it is book two of the Secrets of the Elements series (Race the Sky being the first book of course). The central characters in this book are the same as those in Race the Sky: John Sayers, a storm chaser, and Madeline Kinney, a part time cult researcher. This time, however, they are faced with an unpredictable enemy, Dr. Amalynth, who is a rogue researcher fascinated with electricity and lightning. As the book opens, the doctor has figured out how to bring lightning down to earth on command.

But John and Madeline cannot solve the mystery alone. Partway through the story John visits the enigmatic Dr. Ferganut--a retired professor and a storm researcher with many inventions to his credit. Dr. Ferganut is a character who also appeared in the short stories Firebugs and Dust in the Whirlwind and will also be an integral part of the third book in the series, The Fire and the Anvil. In fact, the third book will not only tie together the first two books in the series but also the two short stories where Dr. Ferganut appears. In one sense, an alternate title for the third book could be, "Firebugs in the Whirlwind".

Which brings me to the next topic...a release date. Right now, I'm thinking the book will be available at the end of November on Amazon and in paperback over at Lulu. This will be quickly followed by a science fiction short story collection, Windows Out, and The Fire and the Anvil should be ready by early spring of 2017. More updates coming soon...
Posted by MGalloway at 4:23 PM No comments:

I apologize for not posting much in some time. I have been working on Book II of the Secrets of the Elements series, The Hammer of Amalynth, for some time now and it is currently going through multiple rounds of edits. I do have lots of updates to share about the book, as well as updates on the short story collection, Windows Out, and Book III of the series, The Fire and the Anvil. This has been a difficult series to write because there are so many things to "get right" in the second book that will not only answer questions about the first book but set up much of the third book. My immediate goal is to have Book II done sometime in November.

Over the next couple of weeks I will start posting regular updates about the books as well as news items of interest. Until then, this verse from the Bible more or less sums up one of the many themes of Book II:

The rough draft of The Hammer of Amalynth is finally done. All in longhand. Once I get everything typed up, it'll get edited multiple times, and then it should be good to go. I'm thinking it'll be available sometime in July.

As for Book III, it seems to have multiple working titles. The final title is The Fire and the Anvil, but the working titles have ranged from Firebugs in the Whirlwind to The Tesseract Rose to The Forge of Midnight to Night of the Fire Tornadoes. I'm going in an unusual direction with the book in terms of technology and plot and I'm going to cover something that probably hasn't been done much (if ever) in a book. It will also be the confluence of a lot of story lines set up in the first two books of this series and even pulls in bits from the short stories Dust in the Whirlwind and Firebugs (both available for free on Amazon and elsewhere). I'm working on the outline now, and hope to have a rough draft done before the fall of this year.

And, somewhere in between all these drafts and outlines, I'm working on the Windows Out short story collection. I don't know when I will finish it, but again, I should get it done before the year is out. It should contain about a dozen stories.

Posted by MGalloway at 10:42 PM No comments:

I've started in on the rough draft of Book II of the Secrets of the Elements Series, The Hammer of Amalynth. The story takes place a few weeks after Race the Sky, and follows up on the mystery that was unanswered at the end of that particular book. The writing process should go relatively fast since most of the groundwork for the series was built in the first book. So far it is has been easier to write, but that's probably because I had the idea for the opening scene figured out months ago. I'm hoping to have it written and edited within the next two months.

The third book in the series is also moving along and is currently in the outlining stage. Then there's Windows Out, which is a short story collection that contains about a dozen or so science fiction stories. In some ways, it's a sequel to Corridors. In other ways it will have more fantasy elements than the other collection. Almost all of the stories have been written, some are finished, and others are in need of editing. This particular book should be done in about 3-4 months.

More updates soon...
Posted by MGalloway at 10:07 PM No comments:

Here are some relatively connected tech stories I've been collecting from around the 'net.

They've officially launched a "drone racing league". Looks like a lot of fun. Well, at least until your machine crashes into a wall and you are out several hundred dollars.

Here are some stories about microbots. One is more speculative, while the other describes a group of ant-like robots pulling an automobile. Here is the accompanying demonstration video.

Then of course there is "Atlas", the upright-walking robot. I don't see it replacing human workers just yet, but the machine's ability to cross uneven terrain is significant.

Here is an article about someone who wants to upload their mind to a machine as a means of achieving a pseudo-immortality. This is something I speculated about a while ago in a couple of stories from Corridors ("IM Forever" and "Image Management"). By the way, Corridors is on sale this weekend for 99 cents over at Amazon.

Finally, I have an update on Book II of the Secrets of the Elements series (Race the Sky is considered Book I). I'm just about to start in on the rough draft of The Hammer of Amalynth. The writing of the book should go pretty fast since I did a ton of prep work for the first book in the series. This novel will continue some of the narrative arcs in Race the Sky and everything will come together in the final book, The Fire and the Anvil. More updates coming shortly.
Posted by MGalloway at 8:43 PM No comments: 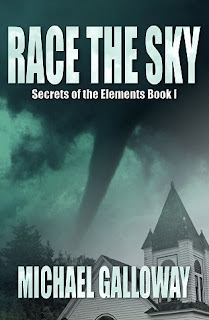 Race the Sky, Secrets of the Elements Book I, is now available at Amazon.com.

This is the first novel in the series and it works a little differently than some of my other books. There is more of a mystery factor to this book which will carry on to the other books in the series. The book even ends with a bit of a mystery (not necessarily a cliffhanger). This is deliberate because solving that mystery will take an entire book of its own (The Hammer of Amalynth). In fact, the primary antagonist of the second book, Dr. Amalynth, appears briefly in this one.

Regarding the second book, I have a rough outline done, but it will take some revision before I can start in on the rough draft. There will also be more of a science fiction edge to the second and third books. Finally, if one theme could sum up the entire series it would be this: Faith rediscovered, faith rebuilt, faith refined. I'll explore each of those stages in the months and books to come.
Posted by MGalloway at 12:24 PM No comments:

This weekend I finished writing and editing a novel about beginnings. It is the story of a storm chaser in search of answers in the sky as well as on the ground. It is also the story of destruction by a false teacher and how it affects those left behind.

Race the Sky is yet another fifteen year novel for me, the other one being Theft at the Speed of Light. Both books had multiple prior versions but this book's iterations were the most divergent, with only the storm chases carrying over from draft to draft. The story has evolved significantly over the years and although I'm going to classify it as science fiction (especially because of the other two books in the series), some elements of the book are eerily similar to real world events.

Within the next couple of weeks I'll have a cover for the book and then I'll post more updates on the series as a whole.
Posted by MGalloway at 1:46 PM No comments: