The Kid at the Typewriter 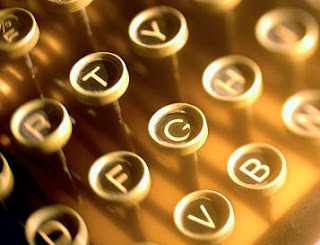 It's been a little while since the last update here, but a few things have happened since I last posted.

First of all, over the past several months I've found myself spending more time analyzing stats, reading blogs, sifting through articles, and reading endless commentaries on the state of publishing. Although this has some value, increasingly I was spending more time comparing my situation to others and spending less time actually writing. I found lots of great information, but over time I also began to lose focus as to why I ever started writing in the first place.

So, a few weeks ago I unplugged from the internet for a couple of days and re-focused on writing new material. I rediscovered the real reason I began writing when I was a kid.

I remembered days and nights of sitting in front of my parents' old manual Royal typewriter, putting in sheet after sheet, and watching stories come to life on the page one by one. I remembered the thrill of finishing off a "novel", usually set in outer space, and then binding the book with hand heavy card stock and glue. I then handed the book out to friends or relatives.

After each book was finished I would almost immediately start in on another. Although I listened to feedback from others, I steadily improved my abilities not because I wanted to pursue some prize or adoration, but because I enjoyed the process. In short, I found writing to be fun.

I've gone back to that now and a funny thing has happened. I suddenly have an abundance of ideas again. To illustrate the point, this past weekend I watched the documentary Transcendant Man. It is an eye-opening film and although it focuses on one inventor, it highlights some of the ongoing trends in technology, genetics, artificial intelligence, and other scientific areas. These trends may indeed be converging at a particular point.

One of the side effects of my return to writing for fun and watching this film is that a day or two later, suddenly a dozen short story ideas sprang to life in my notebook. This is good news, since I was getting a little concerned that the dozen or so stories I had already written down for Corridors would leave the collection rather small in size. Although this has sidetracked me a bit from the planning of Race the Sky, it has opened up a lot of new possibilities for future short stories and novels in the science fiction realm. Fun possibilities.

I'll continue because it's fun.
Posted by MGalloway at 11:50 AM 1 comment:

In the article, there is a photo that looks like a person standing next to some gray rock. That is not rock in the picture, however. It's hail.

Last year, I made a graph of some of the largest tornadoes to track through the U.S. over the past few decades. The trend was concerning: it appears that largest tornadoes are getting larger as time goes on. Yesterday, I realized I forgot to list another monster: the Yazoo City, Mississippi tornado. This one was 1.75 miles across at some points along its 149 mile (!) track. It was rated an EF-4. I plugged the data in, and it just reinforces what I previously wrote/graphed.

About tornadoes...there is also some ongoing research into launching swarms of "quad copters" into tornadoes as a means of collecting data and video footage. Years ago, there were multiple efforts to gather data using "turtles", which were ground-based devices which sat low on the ground. The hope was that a tornado would make a direct strike on the probe and gather data. The quad copters sound a lot more promising, however.

In other news, as I mentioned previously, Gathering the Wind is now available in paperback and on the Amazon. I will also be expanding distribution on my novels to the iTunes store and Barnes & Noble over the coming weeks. A novel related to Gathering the Wind is also in the works, and will hopefully be available towards the end of this summer.
Posted by MGalloway at 5:54 PM No comments:

Just in time for storm season...

Over the past few months, I've been quietly working on a non-fiction book about weather and the Bible. After exhaustively sorting through and researching well over a thousand Scripture verses on the topic, I can now say that the book is ready to go. It will be released on April 14, 2012. Topics covered include: who controls the weather, weather as a warning, weather as judgment, weather in times of battle, End Time climate change, and much more.

On a similar note, I have already started work on a related novel, Race The Sky, which will hopefully be ready by fall. This book will be my first full-length fiction offering since Theft at the Speed of Light, and the story will be centered around a group of stormchasers.

I will also likely run a giveaway or two over on Goodreads for the new title. Stay tuned!
Posted by MGalloway at 3:40 PM No comments: