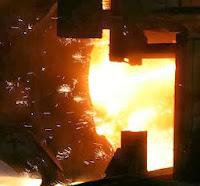 Sometimes writing a novel is like creating a sword.

Years ago, I watched a video titled, "Secrets of the Samurai Sword", which documented the process of creating a samurai sword. One of the intriguing aspects of the process is the repetitive "folding" that occurs while the heated metal is being shaped. This can go on for quite some time, but the end result is that it strengthens the object at a molecular level and if done properly, can go on to create a very sharp sword.

A novel can work much the same way, depending on how it is constructed. I've been experimenting over the past few years with my novel writing process, and although I have an established workflow, sometimes a change here or there keeps things fresh and interesting.

In the sword-making video I referenced above, iron ore sand is first shoveled into a smelting furnace where it is heated to remove impurities. This process can take days. It is then sent to a swordsmith, who reheats the metal pieces and forms them into a sword. Then there is a repeated process of heating, folding, and hammering of the metal. Changes occur, however, on both the visible and molecular level which strengthens the sword yet allows it to bend just enough so that it does not break the first time it is used.

Novels (and their smaller counterparts short stories) can sometimes follow a similar process. Often, the raw material for a book is gathered over long periods of time and from a multitude of sources. Then it is sorted and worked through until a workable idea is developed. The heating, folding, and hammering process can be likened to the composition of the rough draft and its subsequent editing. Many times it feels like an almost endless process of folding ideas together repeatedly until the book takes shape. During this time, too, lots of ideas related to structure, character, dialogue, and setting are tried and often thrown out. After all, some concepts just do not fit. It's not that the concepts or scraps of dialogue aren't useful, it's just that they do not fit into a particular scene or story line.

The same can be true of short story collections, but on a smaller scale. For example, with Corridors, a collection I wrote last year, I penned about two dozen stories. Only fourteen went on to be included in the book, though. The stories that did not make it either did not fit in, were only half-developed, or meandered without a real sense of character of plot. But that was point at the time...to write a large group of stories and pick the best ones out of the bunch to develop further. The stories that did not make it included tales about sea monsters, underwater domed cities, moon bases, and a robotic chef. Some of those will surface later next year.

Right now, the rough draft of Ionotatron is undergoing a similar process. Some chapters are light on detail, but strong on dialogue. Others have deficiencies with setting but still move the story along. Ultimately, some scenes may be tossed or rewritten in different settings, but the basic idea will remain. When the editing begins in earnest, input from beta readers and others often alters a work further. Many times I will make up to a dozen editing passes on a book and if I create an audio version, I can still find aspects to improve on, especially if a scene or piece of dialogue does not read well.

Unfortunately, it seems like every book has its own unique set of challenges and this one is no different. That said, I still hope to have this second installment in the trilogy finished before the end of the year.
Posted by MGalloway at 3:52 PM No comments:

Just a quick post today. As you probably know by now, I've started work on the second book in the Chronopticus trilogy, Ionotatron. Io is turning into an interesting book and much like Fractal Standard Time, it is taking on a life of its own. To give you some hint on the direction this book is taking, check out these two recent articles on an amazing cave find in China and this technological development at MIT where researchers have created jumping "robot blocks" that self-assemble. Yes, there will be caves in this book, along with more machines and leaps in technology, and hints of some societal persecution to come.

Work has also begun on a cover, an in keeping with the theme of the previous book, there will be some visual similarities. The cover still needs a robot, though.

The roots of this book can be found in the stories, "Racing the Anvil Crawlers", "Subterranean Dreams", "Opening Day" and "The Great War" from Fractal Standard Time. Extrapolating that idea out further, the foundation for the next book after this one can be found in the third, sixth, ninth, and twelfth stories of the Fractal collection.

If all goes well, Ionotatron should be finished by early December of 2013, with the final book, Chronopticus Rising, arriving around March of 2014.
Posted by MGalloway at 1:33 PM No comments: